I’m finding it hard to get motivated this week. Obviously, we gave the French the biggest kicking since Agincourt three Saturdays back, but since then, I’m feeling less than chipper. Bloody Pasta munchers turned up to play, and that flaming PE Teacher made the mistake of taking me off, thereby negating our DOMINATION.

It also occurs to me that this is the last time I can share some WORLD CLASS BANTER™ before the end of the 6 Nations. So, I’d best stiffen my upper lip, wipe away that single manly tear and regale you with some insights into the mind of THE HASK.

I’m frankly a bit sick of this nonsense.

Firstly, there was that garbage leaving me, the MIGHTY HASK, on the bench for Big Courtney, only to see him miss a tackle I’d have made in my sleep, thereby exposing that Northern wretch to the ridicule of the masses. Which reminds me, someone keeps stealing things in camp, and I’ve got my suspicions as to who is to blame. When I catch him, well, let’s put it this way, it will absolutely redefine DOMINATION. There won’t be enough of him left to send to the police, unless they’ll take him in a sponge bag.

Then there’s this flapping in the press about a Grand Slam decider, and you can bet that this is going to have an effect on the forthcoming team selection. I mean, if you look at it logically, as that fat Welsh disgrace to back row forwards is STILL DOMINATING his hospital bed (I helpfully pointed out that if he spent less time in Gregg’s and more time DOMINATING the weight room, then this wouldn’t have happened) then I have to be due to start again. I’m either going to be placed at 6 to show some mighty defence, or else I’ll be marshalling the troops from the back of the scrum. Although I suspect the PE Teacher will put Woody there.

Looking at the last match, I think we didn’t take them seriously. It’s understandable because, well, it’s only fucking Italy. A more gutless and craven nation (including the French) doesn’t exist than this lot.

Given that it was at Twickenham, it wasn’t unreasonable to expect us to lay the absolute smack down on them: to DOMINATE their pusillanimous team. 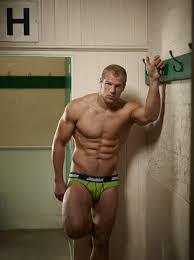 Still, despite their best efforts, and our uselessness (honestly, Jug Ears, can you try to not run into your own players? Over them is fine, but into them is not) they proved to be little more than a speed bump in the way of our ongoing juggernaut of DOMINATION. And you know what I do to speed bumps? Fucking flatten them. And now, as I stand here in my skimpiest pair of briefs, I turn my attention to the match that matters; the one fixture that DOMINATES all others: England v Wales with the fucking championship on the line.

I said some nice things in the press about Tom Croft’s return. Didn’t mean a damned word of it, mind, and I’m stunned that I was taken off so that the lanky streak of piss (disgrace to forwards) could get in Ginsters’ way and DOMINATE the touchline. I find this frankly inexplicable, as cometh the hour, cometh THE GUN SHOW- yet I still see that there are calls for him to start ahead of me. Absurd.

Not actually a twiglet. I took this as Crofty came out of the showers.

Returning to the matter at hand, as mentioned, it’s that miserable nation of sheep shagging choristers who love nothing more than to piss on an English grand slam (some group of tone-deaf imbeciles called the Steroesomethingorother even wrote a song about it) this week. I’m, therefore, beginning my psyche-up process today with a strong dose of self-flagellation. It’s difficult to resist, to be honest, as I can’t pass a mirror without being transfixed by the image of perfect masculinity in front of me. I’ve even been practising a few poses, and am going to come out there ready, prepped, oiled and slightly tumescent.

So, the press is giving us shit, and for some inexplicable reason we’re not favourites. Well, that’s clearly garbage. We are ENGLAND! So what if it’s the first time in 10 years? We were just graciously letting the Celts have a run at the prize for a while. I feel now is the time for us to reclaim our trophy and to reassert the natural order of things. The rightful DESTINY of every good and proper ENGLISHMAN cannot, will not and must FUCKING not be denied!

So, when we step out on the Millennium Stadium pitch to be confronted by an entire nation of genetic unfortunates singing some drivel about Carbs from above, I’m not going to be overwhelmed. I will bet, though, that they have the roof closed. For 2 reasons: Firstly, they naturally, and rightly, assume that God is embarrassed by them, and so need to hide; and secondly because their pasty and twisted visages can’t stand direct light.

Still, as I keep saying to the press, even if we make a balls up of it, this is only another step along the PATH TO DOMINATION. We are preaching the WAY OF THE GUN SHOW, and I’m feeling that now is the time. I will be starting. I FUCKING WILL. I’m a big beautiful weapon of TOTAL FUCKING DESTRUCTION, and you don’t keep your big GUNS at the back when you’re preparing for war. This will be war, and you clearly want your best fucking warriors out there. Which means me, natch.

My pump is fucking primed, and I’m ready to rock out with my cock out and DOMINATE the misbegotten Welsh bastards.

I love the smell of DOMINATION in the evening, smells like….

Don’t want to offend any one with a caption trying to be funny.
Just bask in the reflected glory