In Defence Of Jamie Heaslip: By Jay-Z 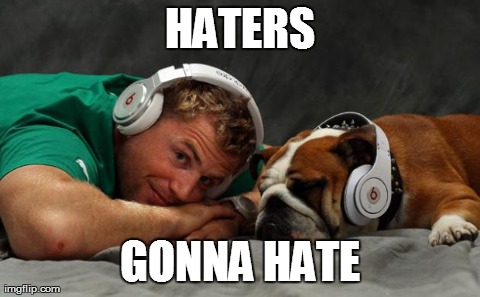 So, word among the canine-based rugby community is that there are people out there, calling themselves rugby fans, who don’t have a very high opinion of Jamie Heaslip. I mean, I’m sure you all know what you’re talking about, and the whole two-time-Lion, nominated for 2013 ERC player of the year thing is just because the rest of the rugby world lacks your special insights, right?

You are so smart, you win a prize!

Apparently, some people think that Jamie is crap now because he’s not making mad metres like he did back in 2009. If I were a particularly bold bulldog, I might even suggest that a few of these people might be letting pre-determined ideas about his personality and interests cloud  their judgement. Since these poor benighted folks lack my heightened sense of intuition (by which I mean smell), I think there are a couple of issues they may be missing.

First of all, there are some context problems when we try to compare 2009 Jamie with the 2013 version. Ireland as a whole were good in 2009; even Tomás O’Leary looked good that year. So what is Jamie up to these days? It may be instructive to look at figures from 2012, a year we can all agree was not a vintage one for Irish rugby.

As an aside, I’m sure you know, there is literally no way that I could misuse statistics or take them out of context to make a pre-determined, ultimately subjective point.

Ireland played 10 test matches in 2012. Of the 9 that Jamie played in (he wasn’t there for the drubbing in Hamilton… coincidence???):

-Jamie ran the most metres of any forward in 3 of them, drew with Ferris in a fourth, and came second-highest for metres run by forwards in a further two.

-In 7/9 games he caught at least one lineout ball.

The idea that he has ‘no purpose’ is therefore, I submit, utter bulldogshit, and this is even leaving aside the fact that the stats don’t cover things like rucking.

However, it is clear from my quick perusal of the figures that his running game has indeed been impacted by the rise of Sean O’Brien; it’s no shock that 2 of the 3 matches in which Jamie ran furthest in 2012 did not feature that feckin’ cow farmer, and if you want to see more evidence of what happens when Seanie’s not around just watch footage of Jamie running rings around Biarritz last weekend.

It is also evident that the roles of each individual member of the Irish backrow fluctuate considerably during this period, with all three backrowers sharing running and tackling duties as well as the non-stat-friendly work. If I were to engage in crazy speculation I might perhaps suggest that this is not so much the fault of the individual players, as it is a reflection of the fact that Deccieball makes literally no fucking sense.

OK, so there was the 2013 captaincy thing. Even I, Jamie’s best and most loyal friend, will admit that did not go very well. He seemed under-confident and his decision-making was crap. But you try being the guy that deposed Brian ‘Ireland’s Greatest Human of All Time’ O’Driscoll, while Drico himself is still on the team, and see how confident you feel about it – especially whilst trying to manage the worst injury crisis in a decade and a coach whose ‘tactics’ reek of desperation.

You think Jamie looks like a knob? How soon we forget.

Now, I’m not saying Jamie’s perfect. First of all, he named me Jay-Z, which is pretty fucking stupid. What is that? Is it in homage to the actual Jay-Z? If so, why? As if one of the world’s most important rappers and producers is meant to be like, oh wow Jamie, you named your pet after me, let’s be best friends? Seriously, dude, I am comfortable enough in my sense of self to assert that you shouldn’t use the name of the man who married Beyoncé in reference to a member of the world’s most flatulent dog breed.

Then there was the whole restaurant business. People think this is all about having a ‘media brand’, as if that’s a bad thing, but I don’t see anything wrong with a bit of entrepreneurship, especially if it’s meat-based. Jamie’s not going to be able to play rugby forever, and he’s got to keep me in the Dolce & Gabbana diamond-studded collars to which I have become accustomed. But did he really have to pose like this?

Texas Chainsaw Massacre, as re-imagined by a moron.

Not only is he just asking for those crunchy PETA losers to throw paint all over his Abercrombie hoodie, but he also looks a fucking prat. I really did try to warn him, I told him he looked stupid, but all he did was give me a belly rub and ask if I was hungry. I was hungry, as it happens, but did he think to give that juicy steak to his precious bulldog after he was done posing with it like an utter knobjockey? No, he did not.

Actually, never mind. Maybe he is useless after all.

As told to Rachel during the latest meeting of the D4 Bulldogs Society, dedicated to the maintenance of the exclusive character of D4’s finest dog parks. Northside terriers and Munster mongrels emphatically not welcome.

796 Responses to In Defence Of Jamie Heaslip: By Jay-Z